Buddy is a ragdoll toy who's the main character. The main goal in the game is to hurt him.

Buddy's shirt appears to be stitched onto his body. His shirt has a star on it. It is white. Buddy has ropes connecting his limbs to his body, though it appears these can be infinitely stretched. He has beads for eyes, and a mouth.

Buddyman has a blue shirt with red sleeves, a cyan belt with his symbol on it, red pants, and blue shoes. He has the same characteristics as Buddy.

He lives in a box and the point of the game is to beat him up.

Buddy's face changes depending on how the player treats him.

Buddy can get bruises and bandages from getting beaten up. They slowly go away however.

Buddy can be stretched by tapping and holding him by 2 limbs. Whenever the player stretches him, he will yell for the player not to stretch him.

Visit the Quote List or Buddy/You to see all quotes.

He will say all those new quotes if he can be smart. This might happen on November 19, 2019.

Template documentation (for the above template, sometimes hidden or invisible)

Visit Template:Buddy/doc to edit this text! (How does this work?)

Accessories can be placed on Buddy to stylize him.

Visit here to see Buddy's Gallery for them.

This is a list of quotes that Buddy says in the game.

Buddy's appearance from the first app.

A screenshot of Buddy from Rocket Buddy waving to you.

Handmade Buddy. (This is from Kick the Buddy: Forever.) 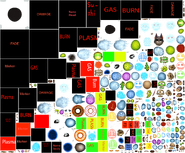 Sleeping Particle (Seen from when Buddy is sleeping.)

Buddy's smaller clone spritesheet. (Seen from in the game files, this is apparently the clone's sprites.) 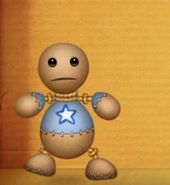 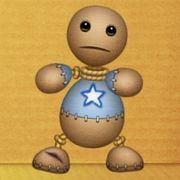 Buddy after you cook him on the Grill.
Add a photo to this gallery

Retrieved from "https://kickthebuddy.fandom.com/wiki/Buddy?oldid=12443"
Community content is available under CC-BY-SA unless otherwise noted.